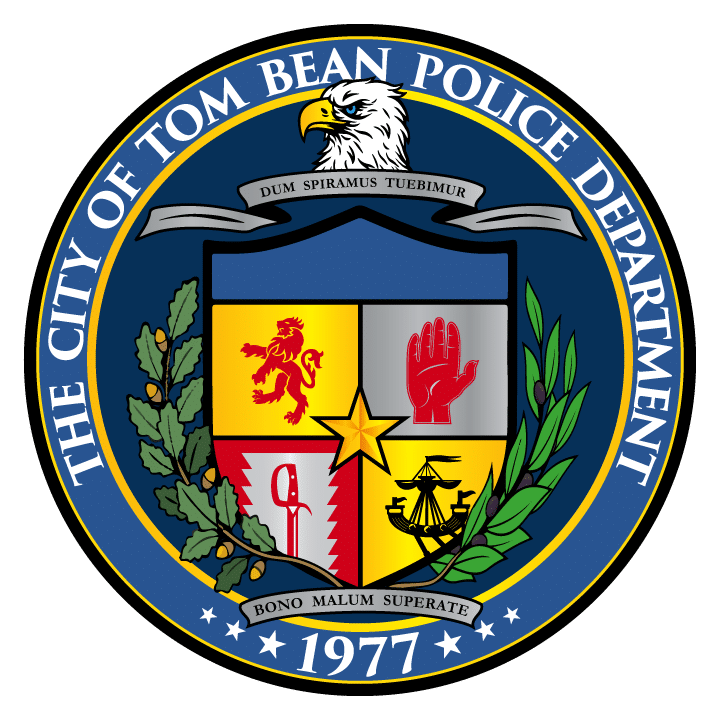 The cerulean tincture of the Chief represents TBPD ‘s jurisdictional authority in and commitment to the community. Within the honor point of the escutcheon is a single gold star which is emblematical of the Tom Bean Police Department’s sworn authority within and representative of the Lone Star State (Texas). The gold tincture of the star is an homage to the original yellow contained in the first official symbolic representation of the Republic of Texas (The Burnet Flag).

The blazon featured beneath the Chief consists of four main compartmentalized devices (symbols or charges) which combine to represent the Bean surname (a derivative of Clan MacBean), and the ancestral line of our city’s namesake Mr. Thomas C. Bean. Independently these devices are: the lion, the hand, the sword, and the lymphad (ship). The four main tinctures of the blazon are red, silver, gold, and black.

The lion is tinctured in red, and positioned on the dexter side, just beneath the chief. The lion is emblematical of undying courage and is standing on a field of gold. The hand, also tinctured in red, is positioned on the sinister side in the field of silver, and demonstrates faith, sincerity, and justice. The sword is tinctured in red and situated on the dexter side beneath the lion. The sword lies in a field of silver and is representative of strength and honor. Finally, the lymphad, tinctured in black, is placed beneath the hand on the sinister side within a field of gold, and symbolizes ancient sea voyages (among which carried the Bean family to the shores of this great nation). The red tincture symbolizes strength and magnanimity. The silver tinctures signify truth and sincerity, the gold tinctures represent wisdom and generosity, while the black signifies constancy and prudence.

The escutcheon stands on a field of deeper blue representing vigilance, perseverance, and justice and is flanked to the left by a supporting live oak branch bearing acorns – symbolic of strength and security, and to the right by a supporting olive branch bearing olives – symbolic of peace and concordance. The two branches are crossed at the base, when combined with the lone star forms a version of the Texas State Coat of Arms.

Beneath the escutcheon lies the department motto “bono malum superate” (overcome evil with good).  Above the escutcheon lies the head of a bald eagle which stands in place of the crown and helmet of traditional heraldry and is representative of the City of Tom Bean’s participation in the federal union of the United States of America.

Above the eagle is the department’s slogan “Dum spiramus tuebimur” (While we breathe, we shall defend)

Around the perimeter of the Seal is the name of the Department” The City of Tom Bean Police Department, and al the base, the year 1977, when the Department was first founded

This seal, as described above, was conceptualized to represent the Department’s dedication to achieving victory in the pursuit of justice, as well as representing the department’s connections to the community and the historical origins that ultimately led to the city’s charter, and the department’s founding almost a century later.

Here is the Resolution adopting the seal in April, 2018: